“I have attended all of the MEMO fund raisers, and this was definitely the best!” An older MEMO supporter told Maureen yesterday. This was so good to hear, as being so involved in the event makes it difficult to be objective.

Right at the start, the ushers were efficient, and made our guests feel special. Piano background music by Michelle Somerfield created an elegant ambiance. The rolling video of our many commercial donors, developed by Karen Parker, was so creative that it provided a fascinating interlude during conversation lapses. Our folksy MC hit just the right balance to make people feel relaxed and happy. Several people mentioned to me that the meal was the best they had ever had in a hotel. How do you broil 240 1” steaks medium rare and still have them so tender you can cut them with your fork? As dessert time approached the Maitre ‘d approached me to remind me that during the tasting in July I had commented that I hoped the Celebration cake drowned in whipped cream and strawberries would be large pieces. He proudly showed me a tray full of 3” cubes of cake with  fresh strawberrys on top. (excuse me for my desert fetish!)

Music at our fund raisers has always been problematic, Too long, too loud, too secular, too religious, too serious, and on and on. This year the Mayor’s band (The Shaver Music Company est. 1954) with all original music by Don Shaver and friends, hit it just right. I think that date refers to a special member of the band that was born on Oct 3,1954! Steve Neufeld, Latin America director of EFCCM under which MEMO works, presented a powerful review of MEMO’s accomplishments over the last ten years. Finally a moving visual presentation of what God has done and is doing through MEMO, in the lives of so many brought tears to my eyes. Thank you Fran Friesen for your hours of dedicated giftedness.

An amazing team of MEMO volunteers produced this wonderful evening. They are serving the God they know, and serving  all of us, and ask for no recognition, just the joy of serving, and a job well done.

We were especially pleased at so many people who were new to MEMO coming and sharing the evening with us, and signing up as volunteers.

But, you ask, “How much money did you make?” We made enough to cover the cost of shipping a container to the Children’s Hospital in Matanzas Cuba.

Thanks to so many of you. 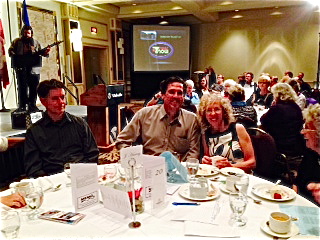