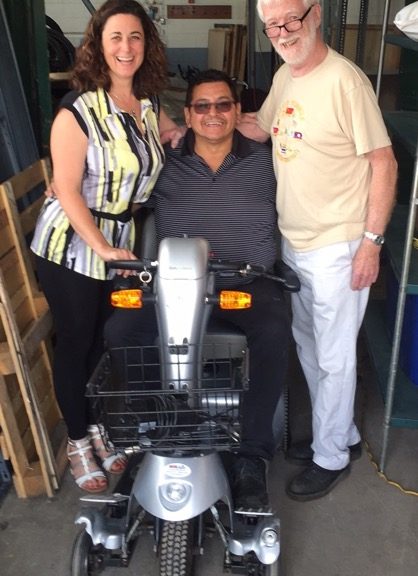 The other day I was told this story:
A young First Nations Woman who lives on a reserve here in Northwestern Ontario received a phone call from her grandfather saying he was coming over for coffee. She assumed he was joking as he had not been out of his house for months due to increasing difficulty walking. A few minutes later there was a knock at the door, and there he was, in his brand new (for him) scooter provided by MEMO. She was overjoyed and says he is scurrying around the reserve visiting his old friends.

I frequently hear people (not MEMO volunteers) but those that just look on and criticize say, “Why are you sending this good equipment overseas when there are so many native people
that need help?” In many cases the equipment we have is not suitable for rural clinics and in other cases government bureaucracy gets in the way.

2 months ago I emailed the minister responsible for Indian Health offering to supply almost new renal dialysis units free for a government initiative to provide dialysis in northern communities.
I have not received a response. A few months ago I received a phone call from Lisa French, the Disabilities coordinator for the Nokiiwin (“Work”) Tribal Council. She wondered if we could supply a walker for someone who fell through the bureaucratic cracks (this did not cause her injuries!!) and did not qualify for government aid. We were happy to help. This was followed up by requests for wheelchairs, commodes etc.
In some of these cases the person would qualify for assistance but it would take 6 to 12 months to get the paperwork done and approved. The need was now, and MEMO was happy to provide equipment immediately, no approvals and no paperwork required to meet the need immediately, temporarily.
And then the request for an electric scooter in the story above. We had a really nice scooter but as is so often the case, the institution or family puts the electric scooter in the basement for years. Lead acid batteries, if not kept charged, deteriorate and cease functioning. MEMO usually cannot afford the expensive deep cycle batteries these run on. I offered Lisa the scooter and she said she would find money to buy batteries. That afternoon she returned to the warehouse with 2 new batteries which we installed. She also produced a pail with water, soap and a scrub brush to clean the scooter. An hour and a half later, with Lisa’s hard work, the scooter gleamed like new! The next day the chief of Pic Mobert reserve arrived to take the scooter in the back of his pickup truck to “Grandpa.” I asked him where the money for the batteries came from. He replied, “The band has several successful businesses operating that are making money, and one of them donated the batteries”.

I find the above story so encouraging. The Nokiiwin Tribal council is a voluntary association of 6 (out of the many eligible) reserves who decided to form an organization that would actually get things done, rather than just talk about it. To see some of their accomplishments visit their website: www.nokiiwin.com. This is a success story that should be on the front page of the paper instead of the many negative articles about our indigenous brothers and sisters.

I recently attended Njokiiwin’s tenth-anniversary celebration. It began and ended with prayers to the Creator God, admitting to failures of pride and selfishness and asking for humbleness, wisdom and strength to carry out the Creator’s work in the name of Jesus! MEMO is honoured and humbled to be able to walk with these brothers and sisters in bringing Health and Hope to those who are in need.

As you support MEMO you can be part of this amazing, ongoing story.

Thought you would enjoy me sharing this with you.
Thanks for your continued support of MEMO
Jerome